The European Commission launched the initiative – FuelEU Maritime – which aims to increase the use of sustainable alternative fuels in European shipping and ports, in efforts to drive decarbonization and sustainability within the industry.

Accordingly, ships calling European ports will be required to source and operate on less carbon-intensive fuels under a new plan that actors across the board are warning will have major impacts while receiving insufficient attention.

This initiative will force shipowners to use fuels with lower carbon intensity, introduce an efficiency credits-trading system and impose zero emissions at berth for some ships, people with knowledge of the situation say.

This initiative – FuelEU Maritime – aims to increase the use of sustainable alternative fuels in European shipping and ports by addressing:

According to a paper launched by the EU, a shift to sustainable alternative fuels in maritime transport is critical to achieve a number of positive environmental effects:

In addition, it is explained that the possible impact on administrative burden will depend on the policy option retained. It is however expected to minimize additional burden by using as much as possible existing EU frameworks for reporting, monitoring and verification of emissions as well as enforcement. It will be essential to ensure coherence with the existing legislation such as the sustainability requirements, definitions and methodologies set out for renewable fuels in the recast Renewable Energy Directive (EU) 2018/ 2001. Coherence with the EU Emissions Trading Scheme, revision of the Energy Taxation Directive and revision of the Alternative Fuels Infrastructure Directive must also be ensured.

This initiative is a separate from the EU push to include maritime into its carbon cap and trade system, the Emissions Trading System, which shipowners have largely accepted and are engaging with, despite some opposition.

Concluding, the paper notes that 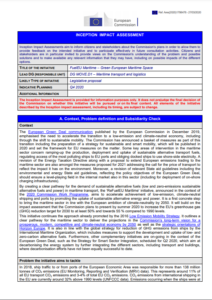